Today, the ACLU Foundation of Northern of California released Failing Grade: The Status of Native American Education in Humboldt County, a report revealing vast and troubling disparities in education outcomes for Indigenous students in Humboldt County. The report exposes a system that fails Native American students by not providing the skills they need to succeed in school and the workforce.

Indigenous students experience higher rates of exclusionary discipline and lower academic outcomes than their non-Indigenous peers. They are suspended at nearly five times the state average and experience chronic absenteeism at more than double the rate of all students across the state. Although roughly 85% of Native American students in Humboldt County graduated high school in the 2018–2019 school year, 90% of those graduates did not meet entrance requirements for California universities and an overwhelming majority of Indigenous students in many districts do not meet California’s college and career readiness metric.

“Indigenous students continue to face overwhelming systemic barriers, including attending schools where there is an overuse of exclusionary discipline such as suspension and expulsion,” said Tedde Simon, Indigenous Justice Program Manager at the ACLU of Northern California. “Also sorely lacking is a culturally relevant curriculum that includes Indigenous worldviews, and a failure to provide school-based student supports with nurses and psychologists who are trained in trauma-informed practices. Simply put, Indigenous students are not made to feel that they belong in public schools.”

Tribal communities have always passed down their cultures, languages, and traditions through Indigenous ways of learning—but with the first contact between Indigenous and non-Indigenous peoples, public education became a tool of oppression and cultural erasure. During the Boarding School Era in the 19th and 20th centuries, including at a site in Hoopa, children were separated from their families and forced into schools where they were required to abandon their tribal customs and traditional ways of learning.

“Indigenous parents and students in Humboldt County live the reality of this report’s findings daily,” said Rain Marshall, Indigenous Education Advocate at the Northern California Indian Development Council. “It’s time for school districts to come together with local tribes, Indigenous-led organizations, parents, and community leaders across Humboldt County to address the crisis of under-education, de facto exclusion, and the failure to invest in the tools and resources needed for Indigenous students to achieve their true potential.” 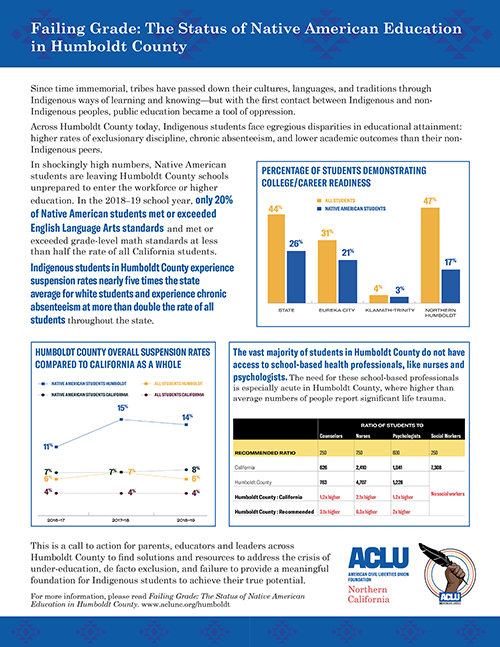 click here for a full-size pdf of the above flyer